Safe Coalition’s newest documentary, “Fentanyl Factor”, is intended to educate the community about the role of Fentanyl in the Opioid Crisis.

“Fentanyl Factor” includes interviews from local residents and law enforcement effected by the opioid epidemic. Also features interview with a Forensic Scientist inside the lab where real and counterfeit drugs are tested.

This film highlights the alarming increase of accidental overdose deaths due to the mixing of fentanyl with other substances such as heroin, cocaine, and counterfeit prescription pills.

Opioids - what are they?

Opioids are a class of drug that includes prescription painkillers and heroin.

Prescription opioids are some of the most commonly prescribed drugs. They help ease short-term pain after surgery, accident, or illness.

Heroin is also an opioid. Heroin is illegal. A doctor will never prescribe heroin.

Misuse of opioids is a leading cause of accidental death in the United States.

Common types of Opioids
What should I ask my doctor before being prescribed opioids?
Opioid use disorder can happen to anyone.

If you or someone you know has an addiction to opioid drugs, talk to your doctor. Ask about naloxone and about medicated assisted treatment (MAT) options.

Recovery from opioid use disorder is possible.

OPIOID EPIDEMIC - 35 THINGS EVERYONE SHOULD KNOW
Fentanyl and Counterfeit Pills
Opioid overdose deaths are on the rise. This increase is mostly due to an opioid drug called fentanyl, which is many times more powerful than heroin. Fentanyl is being added to heroin, counterfiet pills, and other illegal drugs. People may not even know they are using fentanyl until it’s too late. Get the facts about this dangerous drug.
What is Fentanyl?
Illegal fentanyl has become more common.
What are counterfeit pills?
Why is fentanyl so dangerous?
Carfentanil is another very powerful synthetic opioid being added to street drugs. Just a few grains of carfentanil can kill a person.
Who is at risk of a fentanyl overdose?
Overdose
Signs of Opioid overdose

Naloxone is a drug that can reverse an opioid overdose.

*THIS IS A LIMITED LIST. FOR MORE INFORMATION PLEASE CALL PREVENTION RESOURCES, INC.

*THIS IS A LIMITED LIST. FOR MORE INFORMATION PLEASE CALL PREVENTION RESOURCES, INC.

Create your own user feedback survey 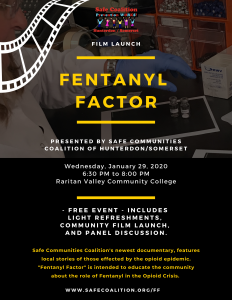 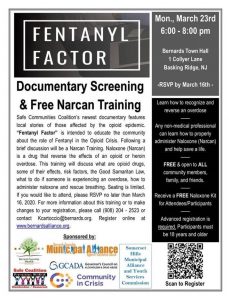 Safe Coalition – Safe Communities Coalition of Hunterdon/Somerset has officially launched the Fentanyl Factor documentary on their website.  The documentary is intended to educate the community about the role of Fentanyl in the Opioid Crisis and features local stories of those affected by the epidemic.  To view the documentary, please click here.

“The toll of opiates on youth over the past decade is staggering – more the half a million overdose deaths. A new documentary, “Fentanyl Factor,” depicts in heartbreaking detail a handful of the young lives swept away by an extremely potent synthetic opiate, Fentanyl, all of whom were from Hunterdon or Somerset counties. Family members showed remarkable strength reliving their loss in interviews in the movie and as members of a panel at a screening of the film January 29 at Raritan Community College.

Each of the stories the movie presents captures the unbearable pain at seeing a young life teeming with promise eliminated by addiction; each shows a young man who falls into drug use and fentanyl delivering the death blow. As several people in the film and on the panel said, “We are not meant to bury our children.” This makes High Point’s treatment for substance use particularly critical. High Point provides medication assisted treatment for opiate addiction, which includes suboxone and vivitrol.

One particularly poignant story came from a mother who appears in the film and also sat on the panel at the college. An overdose left her son comatose and placed on life support. It became clear he would not emerge from the coma. The movie places this woman in a serene setting – a beach with gentle waves lapping the shoreline. She is talking about the day she accepted it was time to take her son off of life support: his birthday.  In the movie, she speaks of his birth and hearing his first heartbeat, and also his last.

The goal of the movie, which will be widely distributed in the coming months is to raise awareness about Fentanyl and its potency (100 times more potent than morphine). A lethal does is the equivalent of a pinch of salt in volume. One of the panel members, a woman who lost her brother to fentanyl, said before his death she knew nothing about it; now it assumes an oversize role as she strives to spare others losing a beloved sibling or child or spouse to overdose.

The panel also featured three officials who have focused a great deal on the issue of drug addiction: State Senator Kip Bateman, Hunterdon Acting Prosecutor Michel Williams and former Hunterdon Prosecutor Anthony Kearns.  Before he stepped down as prosecutor, Kearns convened a town hall in 2019 on the opiate issue and it continues to be an issue he is committed to fighting.  He stressed that has prosecutor he saw the toll on families of all backgrounds, races, creeds; addiction is blind to those aspects of a person’s life.

The three took note of one of the factors that continues to frustrate an appropriate response to addiction – refusal to accept addiction as a disease. This stigma still causes many to continue to view addiction as a weakness.  Watching “Fentanyl Factor” will surely help dispel that misconception.

One young man on the panel, Sean, is committed to banishing that misconception. He said a person’s first use of an opiate may be of his or her choice, but before long, the drug usurps the brain’s capacity for anything approaching rational decision-making. Sean, now more than eight years in recovery, has revived the inner-light addiction had dimmed. Now he “aspires to inspire until he expires,” as he puts it.

Fentanyl had multiplied the loss of life caused by the opiate crisis. The “Fentanyl Factor” offers a lament of the young lives the drug taken by this drug and the shattered families they leave behind. Making it compulsory viewing for students, beginning with middle schoolers, could well preserve thousands of youth. The film illustrates how the youthful sense of invincibility – the “it won’t happen to me” syndrome – does not apply here.

The film was presented by the Safe Communities Coalition of Hunterdon/Somerset.”